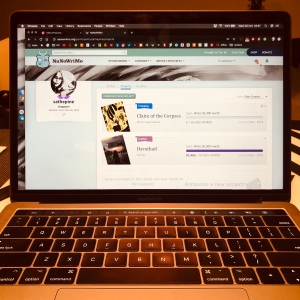 In a previous blog post, I mentioned a checklist of what I intend to prepare before NaNoWriMo hits:

It’s now the end of October, and I think I did well for myself, although there are still a lot of kinks to sort out and a lot of details missing. However, the missing details won’t hinder me too much and I can work through them after, if not during NaNoWriMo (but I don’t want to spend too much time on them during Nano). Before I proceed with my update, I would like to mention the book that helped me sort out my story – Outlining Your Novel Workbook by K.M. Weiland. I’ve read the book and learned a lot so I decided to go ahead and purchase the workbook. 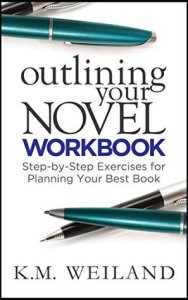 I have not completed the workbook yet and don’t really have the time to complete it before Nano, but I enjoyed the exercises. Basically, the book presents exercises through questions that you can answer to flesh out elements of your story more. I have completed Chapter 1 (The Premise), Chapter 2 (General Sketches) is partly done and partly being worked on, and I’ve done a bit as well for the rest of the chapters (Backstory, Character Interviews, Setting, Extended Outline, Unconventional Outlines). Maybe next year I’ll do this same workbook again, but start my prepping in September. (Or earlier!) I am eyeing another workbook about story structure by the same author, which I will probably do when I’ve completed the draft and in revising mode. I don’t know when that will be because, after Nano, I plan to go back to the fantasy WIP I had been working on and shelve this story for the meantime.

Without further ado, here’s my progress so far:

Instead of a chapter outline, I’ve created an outline for all the scenes in my story. There are 64 in total excluding the Prologue and Epilogue which are just very short scenes and will be written last if I really need them. Of course, I intend to group the scenes into chapters, but for now, the scene list is enough. Here is a glimpse of my scene outline using the corkboard view in Scrivener:

I’ve numbered and titled each scene but those are for my own use only. I’m definitely going to go with the chapter title (or just the number) once I’ve grouped them into chapters, which will be separated by folders in Scrivener.

This is definitely still a work in progress along with my setting descriptions (which I didn’t put in my checklist, silly me), but I have properly identified which characters or groups of characters will be present on which scenes (as well as the location/settings). In case you don’t know, Scrivener allows you to link them through document bookmarks. This means that when you click a scene, you can see which characters are in it, and likewise, if you click a character, you can see which scenes this character is in. Below is a quick look at my character list. 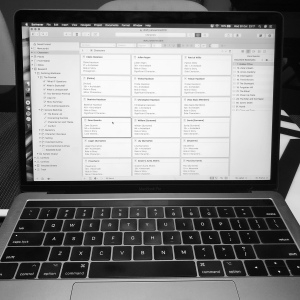 As you can see, it’s still very much in progress, and the names are not final either because they were hastily thought out. But for NaNoWriMo, I will stick to those names. My working title is “Claire of the Corpses” and if I’m gonna keep that, then I’ll have to keep the name Claire.

I went ahead and created a Pinterest board for my story and here’s a shot of it: 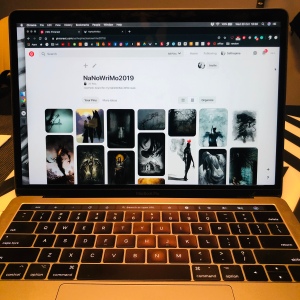 It is a private board so I won’t be sharing it, but it helps me visualize the look and feel of my story. It is also still in progress (and will probably always be in progress?) and I will be putting images in there from time to time if something catches my eyes (or if I find myself going down the Pinterest rabbit hole).

This is a private Spotify playlist I’ve set up for my writing sessions which mirrors the tone of the story. 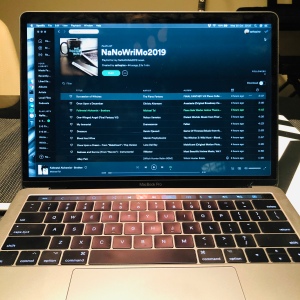 Most of the music on the list are instrumental versions of songs or soundtrack from games and anime. I would say it is also still in progress as I intend to add more music to it.

Although I have some vague ideas of what rewards I could give myself per milestone (mostly sweets), I don’t know which milestones to use. Do I do it every 5k increment? 10k? Do I follow the writing badges in NaNoWriMo? In any case, I know what reward I will give myself after Nano, and that is a new iPad. My current iPad screen is broken and since it’s old I’ve decided to get a new one rather than try to see if they can repair the broken screen. I’ve been thinking of getting a new one for a while now, but when Preptober hit, I’ve decided I won’t be buying a new one until after Nano. Note that the iPad can be a distraction, after all, so after Nano will be the perfect time to get one.

So that’s it for my Preptober Update! I still have some time to get that ✔︎ for Milestone Rewards, but in any case, I am now much more confident about winning NaNoWriMo 2019, which is why I’m gonna go ahead and order that winner shirt right now!

This site uses Akismet to reduce spam. Learn how your comment data is processed.